January 12th is the birthday of His Holiness Maharishi Mahesh Yogi. The day is celebrated by hundreds of thousands of meditators around the World. The Master is largely known for bringing Transcendental Meditation (TM) to householders and followers of different spiritual disciplines, as well as to schools and university campuses.

Although there are quite a few who have met and worked with Maharishi closely, most have never met the man, who some consider to be the greatest Teacher the World has known in our time. His legacy has entered the collective consciousness, and it would take decades before it could be adequately assessed by historians, scholars and sociologists alike.

Yet this is a deeply intimate story.

Being introduced to TM in the mid 90’s, when I was in my late twenties, meeting the Master was not that important. TM for me was just a tool to complement my already rich by then artistic life. Gradually though, Maharishi’s presence grew, my curiosity was aroused, and a seed of desire to meet the Master one day was firmly planted.

From around the mid 90’s, Maharishi was no longer available for general public appearances. The Guru has retreated in Holland and gave televised darshans to a large international community, and on special occasions only. January 12th was one such occasion. Watching these gatherings, I was secretly envious of those who had the privilege to meet and be next to the Master.

By the time my desire reached its zenith, it was practically impossible to meet Maharishi for someone who wasn’t even working for the movement. That time coincided with a transformative awakening, experienced while attending one of the advanced TM programs. It was then, when I had my first intense encounter with the Guru on a level beyond the senses… 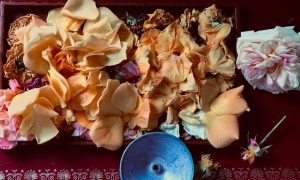 The power of Grace filled my heart with such an intensity of Love for Maharishi, that the mere glimpse of his image was enough to send my whole being into throbs of Ecstasy, often mixed with tears of Joy and Gratitude… Soon, my dwelling became a place of worship. Hundreds of roses were sacrificed at the altar, embalming my heart with the perfume of devotion never known to me before…

While my heart was filled to its brim, the idea of meeting the Guru still lingered in the mind… Encouraged by those who had known Maharishi since the 60’s, I had written a letter to the Master, where I shared my experiences of higher states of Consciousness, but I mainly tried to express my gratitude with as much humility as my knowledge of English allowed me to.

The reply came on that level where the postman himself is the messenger by divine appointment. It was revealed deep in a state of Samadhi… And from there on, my sadhana was guided not just by Maharishi, but by his own Master, Guru Dev himself.

By that time, the desire to meet Maharishi reached its sublime height, and what happened then is too subtle to give to pen…

To put it plainly, the seeker drowned in the Sea of seen, where all desires have found their perfect fulfillment, including that most pertinent wish to meet the Guru. That meeting took place in the Heart. The Union was so complete, that no further physical contact could have possibly altered the serene plentitude of being One with the Beloved…

Looking back in retrospect, it is interesting to observe how that relationship had undergone transformation — from the placidity of the impersonal, through the intensely personal, and ultimately to the universal sense of Love for the Teacher.

For at the beginning, there was this arrogance, which didn’t allow any subtler forms to be perceived, only to grow into a very personal affair with time. I couldn’t care less how many loved Maharishi, he was mine in every sense. That was a deeply personal, individualized relationship, which was eventually and beautifully transformed into understanding that Maharishi belongs to every being.

Moreover, every being in his or her essential nature, is that Great Seer — the Rishi who sees through the Heart of All.

I prostrate at the place where your feet touched the ground… Oh Divine Being who carried Light so Brightly that it Illumined the World within and without. 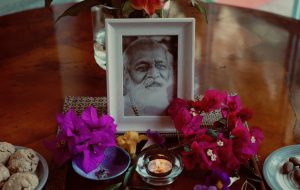