Satsang with my Mother
Prev Next
Search

SITTING WITH MY MOTHER

My mother is going to be eighty on February 25th, the day, George Harrison, my favorite Beatle, was born. Speaking from the medical perspective, her mental state has been deteriorating for the past eight years – she has dementia. Seven of these years I’ve been with my mum literally day and night, often having to share the same bedroom to make sure she is coping (anyone familiar with what it takes to look after someone with this condition would understand what it means). My mother has long forgotten the name she gave me, and recognizing is no longer taken for granted. But please keep your handkerchief just yet, this sharing is a happy one.

Family ties are often where the karmic connections are most intense, and the closer the connection, the greater is the intensity. Seen from that perceptive one’s relationship with a mother surpasses them all. It is here where the umbilical cord was cut and a palpable sense of separation was reconciled by the first embrace. It is here where we’ve learned that love could be blind and physical, even selfish, and yet unconditional. This is where we’ve learned to push against the boundaries of all kinds, this is where we’ve stretched our limits and our imagination, constrained by motherly care. Hence here is where the karmic bonds are most pertinent and unless we transcend them we are bound by that knot which ties us to this identity through the birthing act itself.

Of course not all motherly bonds have the same tendency to keep us from realizing our true nature – after all karma works in a blessed way too. I consider myself to be fortunate as my relationship with my mother was and still is such a blessed exception. Not that I didn’t get my share of ‘pushing against the boundaries’ imposed by parental care but being the only child doubled by being brought up by a single mother, the intensity of that relationship speeded up all processes in our family’s nuclear. In that, and being busy with making ends meet, she had to be concise in what she chose to impart as a foundational ground for her child. Yet I’m forever grateful for those few maternal directions I received in what seemed as crucial moments in my life. For that I consider my mother to be my first and my last teacher. Here I just want to share a few moments of when we sat together and a few lessons I’ve learned to steadfast the unfoldment of my soul. 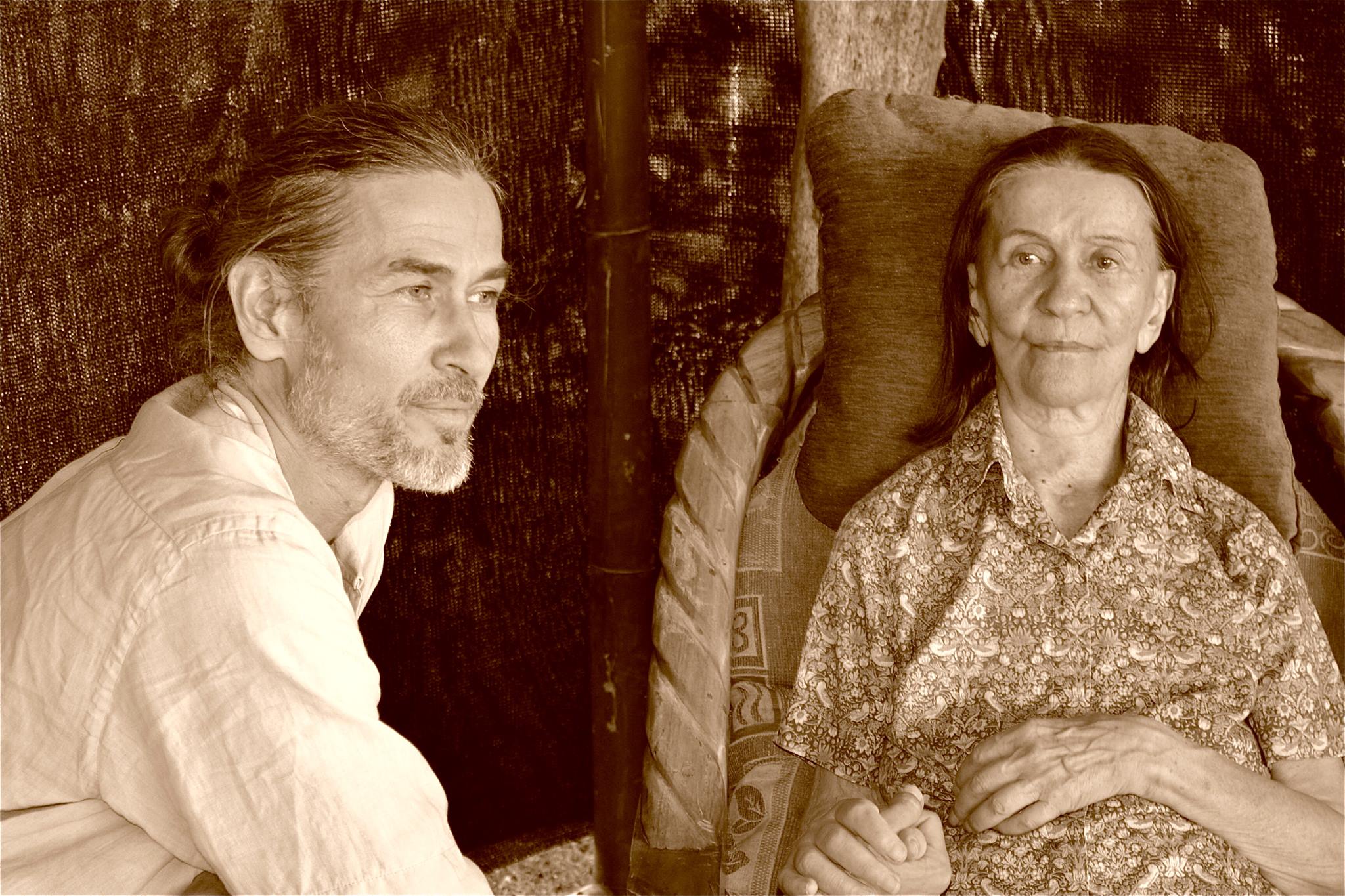 The first and most important lesson I recall was that Love and Life are synonymous, and if I were to follow my heart – no matter how painful it feels at times – my life would flow in an evolutionary direction.

Second she taught me that success is not measured by fame or money, something which took me years to understand and experience directly. That said, she used all her savings to make sure I get the best education possible to continue with my art studies.

My mother sat with me at the grave of my first daughter Laura, and her motherly strength allowed me to collapse in waves of unbearable grief… Though she loved her granddaughter just as much, she had no choice but to stay solid so that her son could express the pain of loss fully. This was my greatest lesson in humility.

Later on my mother introduced me to Maharishi Mahesh Yogi‘s teaching, and encouraged me to learn Transcendental Meditation. In this way, she was instrumental to my initiation into the Tradition of Vedic Masters.

Perhaps the happiest moments of us being together were those on meditative mattresses as ‘flying yogis’.¹ Often we sat enraptured by Bliss or absorbed in hours of deep Silence, in those advanced meditative programs shared with many others.² Soon after the main impact of awakening, my mother was the first to recognize me as her teacher, which never interfered with her total love and devotion for the Maharishi-ji. These were lessons of shared Bliss.

When after a minor surgery, parts of her brain refused to wake up, and the shadow of dementia set in, we both entered perhaps the most challenging time in our relationship. This is when the full karmic payoff unfolded in all its terrifying beauty. Bathing and dressing my mother every morning, when she became incontinent, feeding and putting her to bed every night, was part of my life for seven years, even as I kept working at a day job. By then I’d considered myself to be a living Brahman, which meant to be of support for those who need it in my work as a guide. And yet again my mother’s condition was pressing with yet another set of tests, of helping her even as she was often not even fully aware that her only child was her caretaker.

As my work demands traveling and my mother’s health is too fragile to take her with us, we were blessed to find a lovely Costa Rican lady who is taking care of my mother. This lady says Inna (my mother’s name): ”Ella es muy feliz, muy tranquilo…”, she adds in english, ‘your mother is not like others I’ve worked with in this condition’… I don’t care what the medical opinion is on the subject, my mother is in a perpetual state of peace and even if the price is her mental capacity to interact, she radiates that sense of contentment we all are trying to re-create.

Now, I am sitting with my mother again, after not seeing her for a year since we’ve been traveling across the Atlantic and back. Our eyes meet for a brief moment without much emotional intensity and she looks away with an unperturbed sense of detachment. Someone might disagree that this isn’t a true transcendence, but a case of pathology. Well, qualitative statements make no difference here. Yet despite no real recognition on the part of my mother as she sees her son, or her grandchildren, or any children who happened to play in her vicinity, there is a recognition of a different kind. I hold her hand, tenderly as I could, and she gently squeezes it back in turn…

I bow to you mother as Mother Divine, who bares witness to her Spirit in all forms, conditions and embodiments. 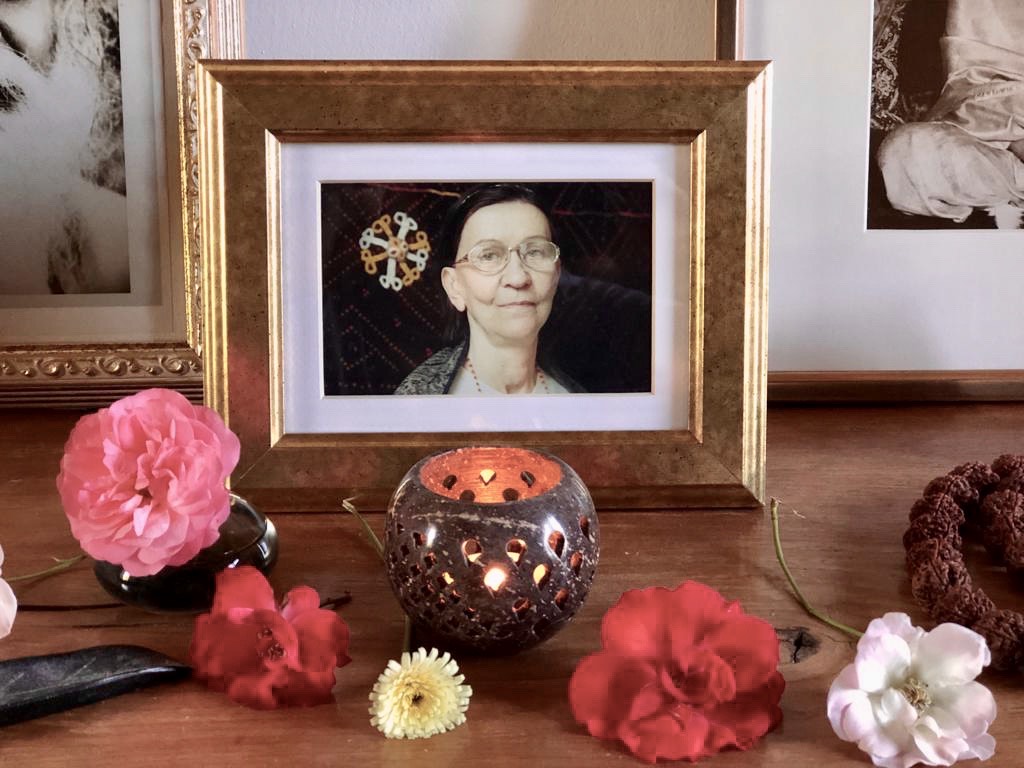 Inna Kufayev passed away on May 19th, 2016 in Costa Rica at the age of 82 in the presence of her care, Hilda Duran. At the time Igor was holding a week-long immersion in Southern California, he flew over to perform the last rites of passage.

¹ ‘Flying Yogi’ is a casual, insiders term for those who practice TM-Sidhi Program designed by HH Maharishi Mahesh Yogi in mid 70-s.

² Large group of advanced meditators assembled to dissolve conflicting tendencies in the environment. For more information.